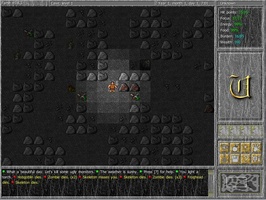 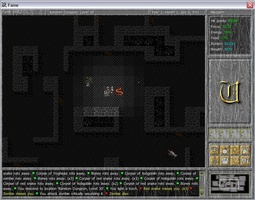 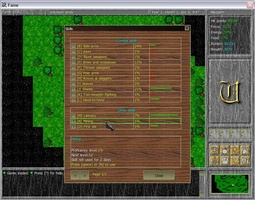 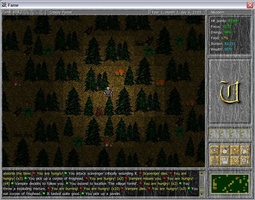 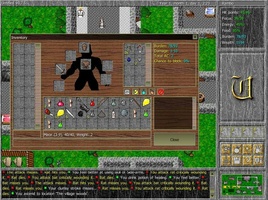 Advertisement
Fame is an RPG that, despite taking material straight from roguelike classics like Ancient Domains of Mystery or Castle of the Winds, goes above and beyond these games by offering an enormous role-play game in every respect.

The first thing to do before starting your adventure is create your character. And from this moment you'll already see Fame's depth. Not only can you select the name, class, attributes, and gender of your hero, you can also choose their age and some special characteristics, such as whether they're missing an arm or a leg.

As you create your character you can also choose whether you want permadeath or the possibility to bring your character back to life. If you choose the first option, you'll get the proper roguelike experience.

Fame's level of detail goes as far as your character not being able to read signs if, while creating your hero, you chose that he would be illiterate. Of course, this is something you won't be able to do either if it's nighttime and you don't have a flashlight.

Add to all these small details a very solid, traditional role gameplay where you talk with loads of characters, receive missions and assignments from them, buy and sell objects, and, of course, fight with tons of creatures.

The combat system, as usual, is turn-based. When it's your turn you can choose to attack with the weapon you're carrying, use one of the objects in your inventory (like potions), cast spells ... or run away.

Fame is an RPG that's full of possibilities. It has a long and interesting story and very solid gameplay. Even though the graphics aren't exactly excellent, this is an RPG that every fan of the genre will like.
Reviewed by Andrés López Translated by Robert Zant
Advertisement

Why is this app published on Uptodown?
(More information)

There are opinions about Fame yet. Be the first! Comment